We are raffling a 2021-2022 Season Power Pass and a Level 1 Backcountry Avalanche Course. Read more

KPAC is especially grateful to our generous community. Your support makes avalanche forecasting and education possible in Northern Arizona. Most of KPAC's funds come from fundraisers and grants - your contribution matters! Check out these fundraisers below.
2021/2022 Season Power Pass Raffle (24 days remaining)
Support KPAC and you might win a Power Pass for unlimited resort skiing and riding! 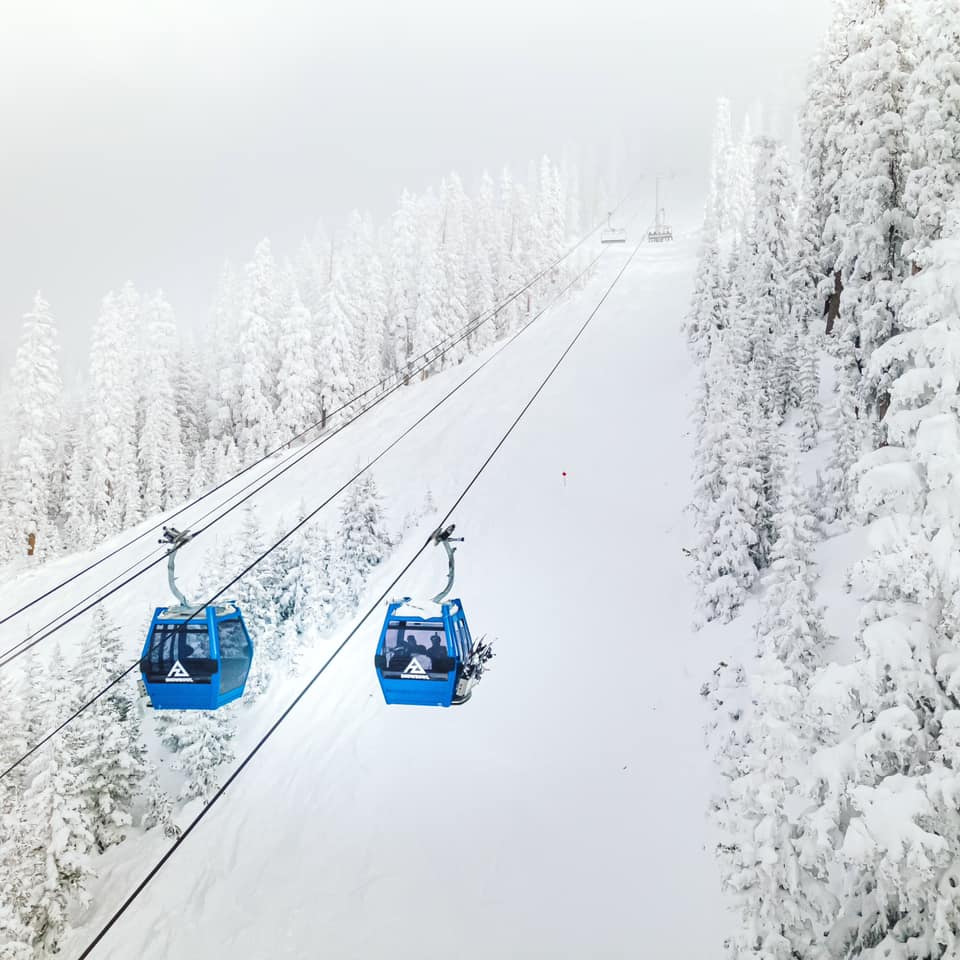 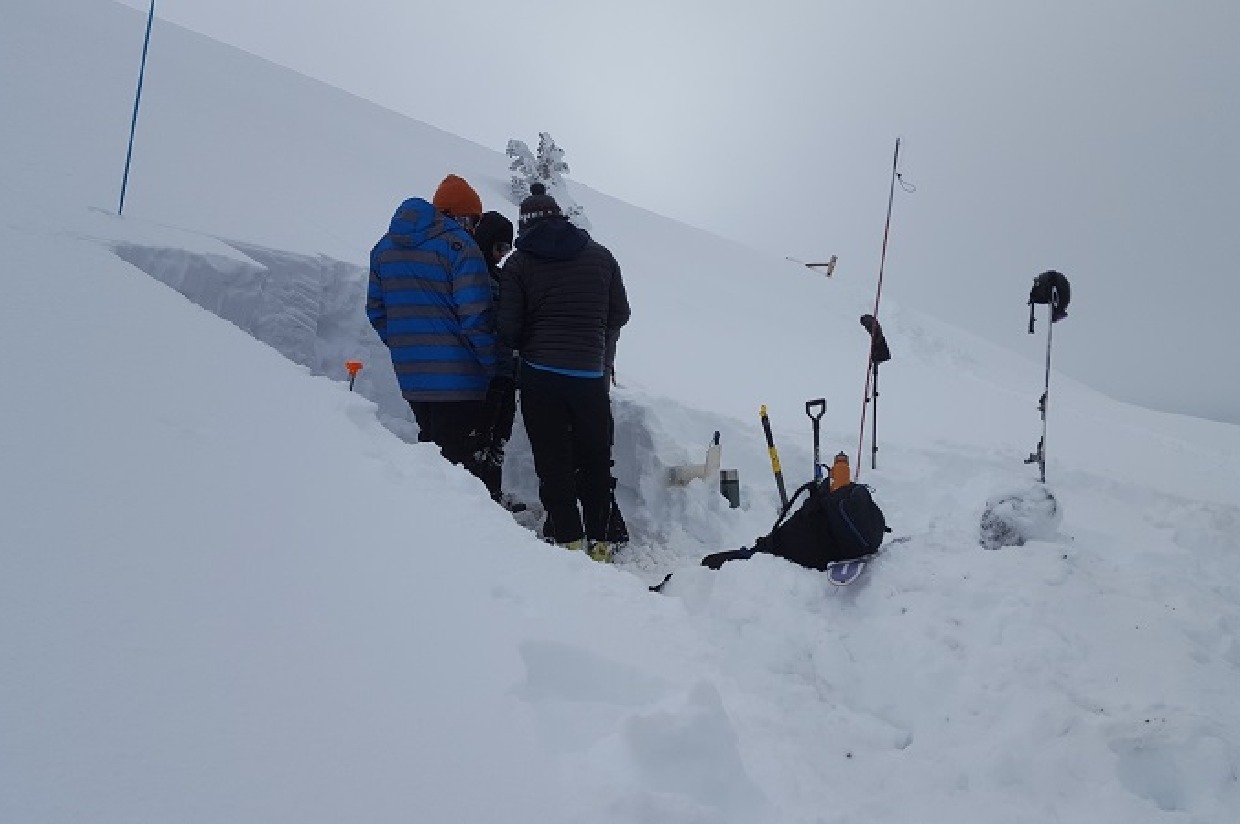 Overall: A few inches of snow accumulated during two events in late September and early October. A stronger system during October 11-12 provided a bit more snow at lower mountain elevations. At 9730ft, the Snowslide Canyon (Innerbasin) SNOTEL reported a snow depth of 7" (18 cm) on October 12. Presumably higher elevations have received more snow, but observations (at a distance) indicate that most rocks are still visible above the snow.
Currently, conditions are not suitable for backcountry ski touring or boarding, and even access by foot may be challenging due to uneven distribution and consistency of snow cover. Until more snowpack builds, natural and human triggered avalanches will be unlikely.
We will resume regular snowpack summaries when the backcountry gets sufficient coverage.
KPAC is especially grateful for the support we receive from our generous backcountry community. Your support makes avalanche forecasting and education possible in Northern Arizona. Please visit the above banner to support KPAC and win rad raffle items!
Near and Above Treeline:n/a
Below Treeline:n/a 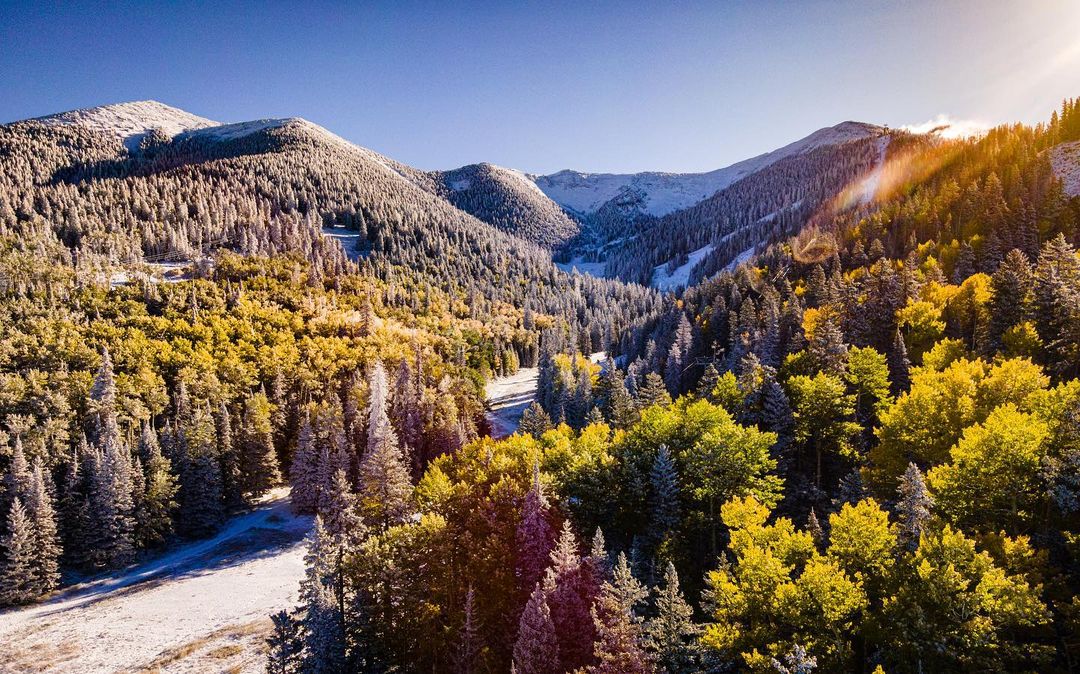 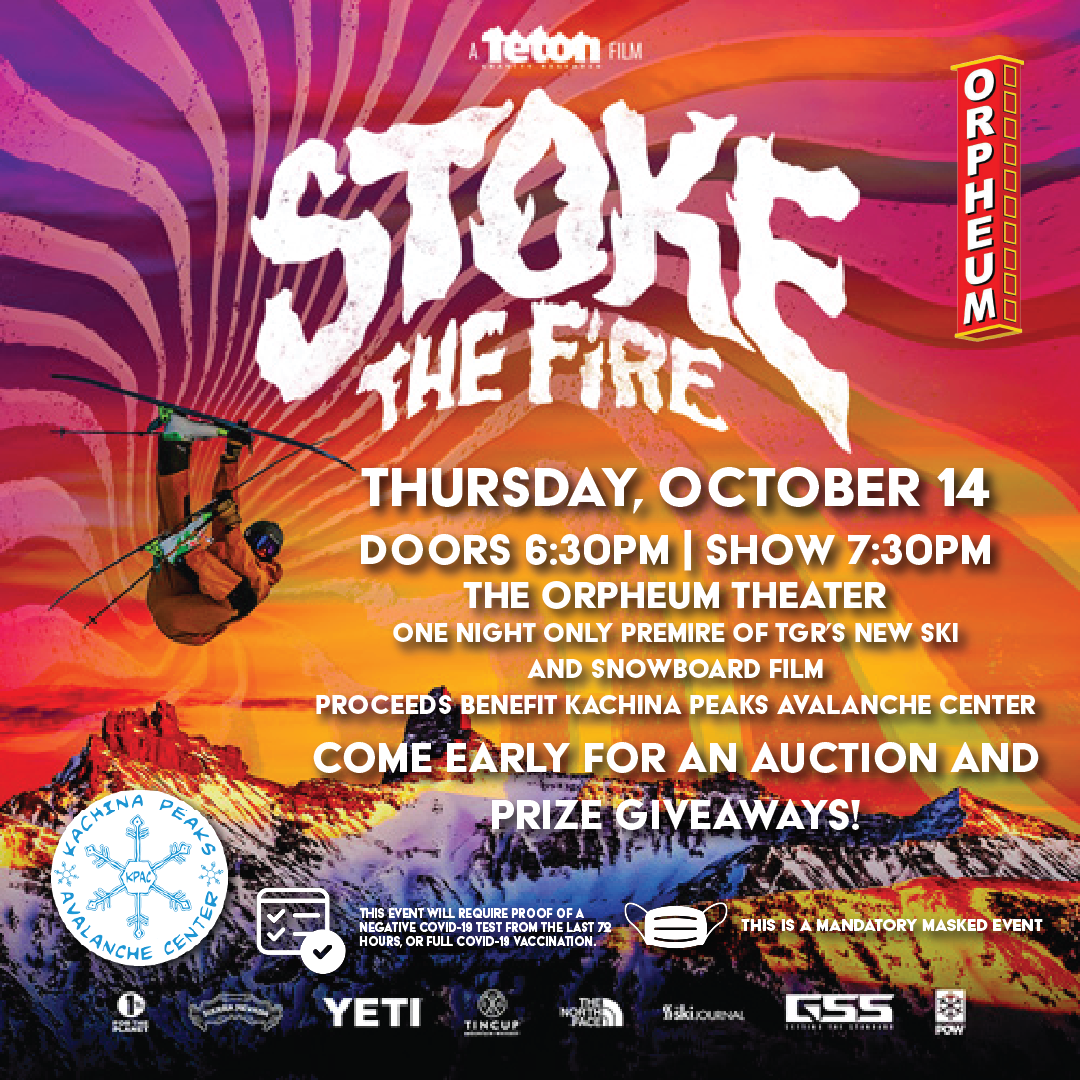 Sign Up to get notified when we update the summary.

Release of a soft cohesive layer (a slab) of new snow that breaks within the storm snow or on the old snow surface. Storm-slab problems typically last between a few hours and few days. Storm-slabs that form over a persistent weak layer (surface hoar, depth hoar, or near-surface facets) may be termed Persistent Slabs or may develop into Persistent Slabs.

You can reduce your risk from Storm Slabs by waiting a day or two after a storm before venturing into steep terrain. Storm slabs are most dangerous on slopes with terrain traps, such as timber, gullies, over cliffs, or terrain features that make it difficult for a rider to escape off the side. more info

Release of a cohesive layer of snow (a slab) formed by the wind. Wind typically transports snow from the upwind sides of terrain features and deposits snow on the downwind side. Wind slabs are often smooth and rounded and sometimes sound hollow, and can range from soft to hard. Wind slabs that form over a persistent weak layer (surface hoar, depth hoar, or near-surface facets) may be termed Persistent Slabs or may develop into Persistent Slabs.

Wind Slabs form in specific areas, and are confined to lee and cross-loaded terrain features. They can be avoided by sticking to sheltered or wind-scoured areas. more info

Release of a cohesive layer of soft to hard snow (a slab) in the middle to upper snowpack, when the bond to an underlying persistent weak layer breaks. Persistent layers include: surface hoar, depth hoar, near-surface facets, or faceted snow. Persistent weak layers can continue to produce avalanches for days, weeks or even months, making them especially dangerous and tricky. As additional snow and wind events build a thicker slab on top of the persistent weak layer, this avalanche problem may develop into a Deep Persistent Slab.

The best ways to manage the risk from Persistent Slabs is to make conservative terrain choices. They can be triggered by light loads and weeks after the last storm. The slabs often propagate in surprising and unpredictable ways. This makes this problem difficult to predict and manage and requires a wide safety buffer to handle the uncertainty. more info

Release of a thick cohesive layer of hard snow (a slab), when the bond breaks between the slab and an underlying persistent weak layer, deep in the snowpack or near the ground. The most common persistent weak layers involved in deep, persistent slabs are depth hoar or facets surrounding a deeply buried crust. Deep Persistent Slabs are typically hard to trigger, are very destructive and dangerous due to the large mass of snow involved, and can persist for months once developed. They are often triggered from areas where the snow is shallow and weak, and are particularly difficult to forecast for and manage. They commonly develop when Persistent Slabs become more deeply buried over time.

Deep Persistent Slabs are destructive and deadly events that can take months to stabilize. You can trigger them from well down in the avalanche path, and after dozens of tracks have crossed the slope. more info

Release of wet unconsolidated snow or slush. These avalanches typically occur within layers of wet snow near the surface of the snowpack, but they may quickly gouge into lower snowpack layers. Like Loose Dry Avalanches, they start at a point and entrain snow as they move downhill, forming a fan-shaped avalanche. They generally move slowly, but can contain enough mass to cause significant damage to trees, cars or buildings. Other names for loose-wet avalanches include point-release avalanches or sluffs. Loose Wet avalanches can trigger slab avalanches that break into deeper snow layers.

Travel when the snow surface is colder and stronger. Plan your trips to avoid crossing on or under very steep slopes in the afternoon. Move to colder, shadier slopes once the snow surface turns slushly. Avoid steep, sunlit slopes above terrain traps, cliffs areas and long sustained steep pitches. more info

Release of a cohesive layer of snow (a slab) that is generally moist or wet when the flow of liquid water weakens the bond between the slab and the surface below (snow or ground). They often occur during prolonged warming events and/or rain-on-snow events. Wet Slabs can be very destructive.

Avoid terrain where and when you suspect Wet Slab avalanche activity. Give yourself a wide safety buffer to handle the uncertainty. more info

Cornice Fall is the release of an overhanging mass of snow that forms as the wind moves snow over a sharp terrain feature, such as a ridge, and deposits snow on the downwind (leeward) side. Cornices range in size from small wind lips of soft snow to large overhangs of hard snow that are 30 feet (10 meters) or taller. They can break off the terrain suddenly and pull back onto the ridge top and catch people by surprise even on the flat ground above the slope. Even small cornices can have enough mass to be destructive and deadly. Cornice Fall can entrain loose surface snow or trigger slab avalanches.

Cornices can never be trusted and avoiding them is necessary for safe backcountry travel. Stay well back from ridge line areas with cornices. They often overhang the ridge edge can be triggered remotely. Avoid areas underneath cornices. Even small Cornice Fall can trigger a larger avalanche and large Cornice Fall can easily crush a human. Periods of significant temperature warm-up are times to be particularly aware. more info

Release of the entire snow cover as a result of gliding over the ground. Glide avalanches can be composed of wet, moist, or almost entirely dry snow. They typically occur in very specific paths, where the slope is steep enough and the ground surface is relatively smooth. The are often proceeded by full depth cracks (glide cracks), though the time between the appearance of a crack and an avalanche can vary between seconds and months. Glide avalanches are unlikely to be triggered by a person, are nearly impossible to forecast, and thus pose a hazard that is extremely difficult to manage.

Predicting the release of Glide Avalanches is very challenging. Because Glide Avalanches only occur on very specific slopes, safe travel relies on identifying and avoiding those slopes. Glide cracks are a significant indicator, as are recent Glide Avalanches. more info

The summaries on this site were written by Kachina Peaks Avalanche Center Board Members. They are based on a broad spectrum of data collected from weather stations, National Weather Service point forecasts and field observation by qualified individuals.

The summaries are not intended to substitute for good knowledge and decision making skills in avalanche terrain. If you have any doubt of stable conditions, please stay away from avalanche terrain. You can usually find good places to go that are not prone to avalanches, such as on low angle slopes away from avalanche run-out zones. If you have any questions about where to find such places, you should consider further avalanche educational opportunities, such as those listed on our education page.

Starting in 2012 Kachina Peaks Avalanche Center (KPAC) has publish a weekly Snowpack Summary on our website. These summaries are currently issued on Friday afternoons. On occasion, we will give storm updates or warnings of rapidly increasing avalanche hazard at more frequent intervals. Our objective is to reach weekend recreationist, informing this user group of prevailing conditions, but particularly warning of avalanche hazards whenever they are present. Many people have asked us why we use the format we do, but do not include a danger rating or a hazard/stability rose as many other avalanche centers do around the west.

The National Avalanche Center (NAC) advises small operations like KPAC, who do not issue daily bulletins to not use danger ratings in our snowpack summaries due to the regular but intermittent nature of their field observations and the length of time between issuance of snowpack summaries. A primary concern is for how conditions can change in the time between publications, potentially giving the public misleading information. At this point, we simply do not have resources to monitor the snowpack at the level necessary to accurately produce more frequent bulletins. While we understand the benefits of a danger rating using the North American Danger Scale, we also feel that our format encourages people to dig in a little deeper, and spend some time reading what our forecasters are saying. Although the area that we forecast is relatively small, the variability has proven quite large. Inner Basin conditions are often surprisingly different from those on the more wind-affected western side on the Peaks.

We hope the information that we provide in summaries helps give you a good overview of what is going on out there, and what avalanche problems you should be attentive to, but if there is any uncertainty, then we encourage you to ask questions via Facebook, info@kachinapeaks.org or Submit an Observation.

built by Troy
Back to top